Grayson’s occupational therapist came for a visit today. Bless her heart, she is the sweetest woman in the world- she just loves Grayson, even though he screams his little head off most times she comes. But she holds him tight and sings to him until he calms down- it’s so sweet. Today, little McFussy was in rare form- he had the fussies even before she arrived, and they just escalated from there. We finally got him calmed down enough to work on our favorite new challenge…solids.

Apparently there are a lot of mechanics that go into swallowing food, having to do with your tongue, palette, chin, and head (oh, that silly head of his). The mechanics haven’t clicked with Grayson yet, unfortunately. Our first challenge was getting him to sit in his booster seat. As you probably noticed from this post last week, we have to stuff blankets around him to get him to sit up straight enough to eat. After much experimentation, we decided that we are going to eliminate that part of feeding right now and I am going to hold him to feed him. Grayson needs to focus on one thing at a time- food in his mouth and holding his head up straight are too much for him right now. We worked on putting cereal in his mouth the right way. Part of me felt really stupid having to have someone show me how to put cereal in my baby’s mouth. Then we worked on touching his chin to make a seal so he would swallow. He swallowed 2 times in about 10 minutes…frustrating. She told me it’s dangerous if he doesn’t swallow- the food could just sit in his throat and then slide down when he’s not expecting to swallow, and he could choke. Grrreeaat.

So just add this new little stumbling block to the list. I knew he definitely wasn’t ready for solids at 4 or 5 months, because of his motor development. But he’s 6 months now, and the problem isn’t just his motor skills. I really, really want an answer as to what is going on with my baby. Why is he having to work so hard to do such simple things? Why does he clench his muscles so tight and stiffen up when we put something in his hand? Why is he so tiny? And why is he soooo fussy these days? (and yes, I realize the fussiness could be totally unrelated to any of this, but it’s still frustrating).

We are working on getting some other medical opinions. We made an appointment with a neurologist, but he can’t see him until early May. I am going to the hospital on Friday to pick up copies of the MRI scan to take to another doctor- maybe someone else can give us a clue what’s going on.

The OT is dropping by again tomorrow morning for “breakfast”- I told her Grayson’s best time is early in the morning, so we are going to try the feeding thing then. I am praying for  restful sleep for my little guy tonight so he’s ready to chow down in the morning.

And, on a totally unrelated note, here’s another cutie pie picture taken by Rebecca from our little photoshoot the other day- I just love his tiny little Chuck Taylors! 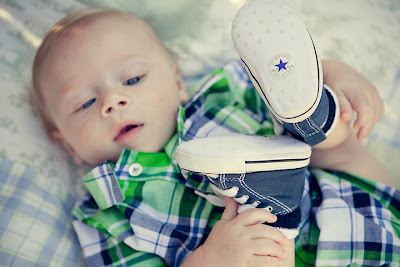