November 26, 2016
It’s Saturday evening and we are driving home from the ranch. I’m tired and have a lot of work ahead getting unloaded and kids fed and in bed. So I’m cheating on #NaBloPoMo today and publishing a 2/3 written draft from almost 15 months ago- Nolan’s birth story. I never totally finished writing it, and am not going to try and jog my memory now, but I am glad I wrote the most important parts. Sorry, kid, love you to pieces.

As you may know from my posts (or lack of posts) since January, I had a hard pregnancy. I was sick almost immediately after testing positive and it never got much better. I was constantly hungry and nauseus, which is not a fun combination to endure for 9 months. I honestly wonder why I didn’t gain more weight than I did, because it seems like I was constantly stuffing food in my mouth, both day and throughout the night. So, by the end I was done. Done, done, done. I hate that I felt this way, because it was my last pregnancy. I’m still processing the whole “last baby” thing, and all the emotions that go with that, both negative, positive, and everything in between. And I’m sure I’ll be processing it for quite a while, as Nolan grows and meets milestones that I’ll get to witness for the “last” time. Sigh.

Anyway, already having had two babies that were two weeks early, I assumed this one would follow suit. As I approached full term, I got more and more uncomfortable by the day, and honestly was in pain and just miserable most of the time. I was ready. I briefly considered scheduling an induction, but my doctor said she couldn’t do it until 39 weeks and she didn’t think I would make it that far anyway. At my 37 week appointment, I was dilated 3 cm. The next day, I started having mild contractions.

My appointment was on a Thursday, and the next day I got an email from my doctor with the subject line being “Stay Pregnant!” I adore my doctor, and I would have been crushed if she wasn’t able to deliver my third baby. She was going out of town that weekend, so I had to stay pregnant until at least Monday, August 31. Right after reading that email, I went to the bathroom and eek, I was starting to lose my mucus plug. Shoot. I emailed her back and she replied that she was going to be covering for the on-call doctor starting Sunday at 5:00. Ok, new goal- make it to Sunday at 5:00. That weekend, I tried to lay around and relax as much as possible and “stay pregnant”- ha! I was having contractions and generally didn’t feel very well, but I was determined.

Sunday afternoon, I decided to start walking, because I knew I would make it to 5:00 and like I said, I was ready- done being pregnant. I took Charlotte around the block a few times, and then my mom came and got her for the night. I went upstairs around 3:00, went to the bathroom, and honestly thought my water broke. I was contracting, “leaking”, and ready- so I took a shower and off to the hospital we went.

Once I got to L&D and changed into a gown, the doctor (not mine) checked me- still at 3 cm, and no, my water had not broken. Aaaa! I was having regular contractions and my blood pressure was high, so they took a lot of labs, which came back normal. The doctor told me to get dressed and go home, but my amazing friend J, who helped me with Charlotte’s birth, was there with me and encouraged me to walk to see if that helped jump-start things. I walked for a few minutes, but got frustrated quickly and just decided to go home.

Monday, I really don’t remember- really, I have no recollection of what happened that day. I woke up Tuesday morning about 6:00 having strong-ish contractions- definitely painful, but nothing I couldn’t talk through. I called my doctor and she said to come in to the office at 8:30 and she’d check me. My mom offered to help, so we drove to the doctor- she took Charlotte to Chick Fil A down the street and I took Grayson in with me. In the office, my blood pressure was high again but I was still only dilated 3.5 cm. My doctor said because of the BP, she could induce me that day if I wanted (I was exactly 38 weeks). I didn’t hesitate at all- YES. By this point, I was so tired of the uncertainty, and the stress of coordinating where the kids were going to be. I just wanted to have the baby!

My mom drove me to the hospital and then left to take Grayson to school and Charlotte to the zoo. Labor and Delivery was really busy that day, and I ended up waiting about 20 minutes to be called back to a room. There were no actual delivery rooms available so I was put in an ante-partum room for much of the day. Ryan arrived at the hospital shortly after I got in that room and J came up a few hours later- I was starving and she was so sweet to go to the store and snuck me my favorite crackers.
An IV was started right away, and a few hours later I was given penicillin because I was Group B strep positive (ugh, I was negative with both other babies). That penicillin going into my hand was the most painful part of the entire day- it burned SO badly I wanted to cry. My blood pressure was fine in the hospital-probably  because the stress of ot knowing when this was going to happen was gone. There were several times when the nurses told me they were moving me to a delivery room, but I kept getting bumped for women coming in in active labor.
Finally, I was moved to a delivery room and things started happening quickly. I got my epidural, my doctor broke my water, and pitocin was started all in about 45 minutes. My doctor was concerned that the baby was head down but turned to the side, so I had to lay on my side with one leg in a stirrup for 30 minutes and then switch to the other side. And actually, that position was really comfortable. As we did with Charlotte, we all (me, Ryan, J, my doctor, and the nurse) made predictions about the baby: sex, weight, and time of birth. I was a lot more accurate this time than I was with Charlotte! 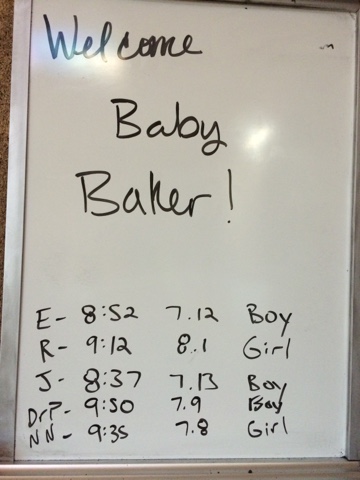 My epidural worked just as it should and all I felt was pressure. At about 8:15 pm my doctor arrived and I got ready to start pushing.

Nolan Reid was born at 8:31 pm on my third push. After two pushes I heard “look at all that hair!” ha! and then on push 3 “It’s a boy!”He immediately started wailing.