October 27, 2012
One year ago today, Grayson became a tubie. He had an NG tube placed- what we thought would be a temporary solution to his poor eating, vomiting, and low weight.

Seven weeks later, he was not eating anything by mouth, and had surgery to get a PEG tube placed in his tummy, and then a month after that, got his G-button.

Today, he has a GJ tube and gets all of his nutrition fed into his intestines, almost 24 hours a day. It’s definitely not the typical way to feed your 2 year old, but Grayson has never been one to do anything typically! 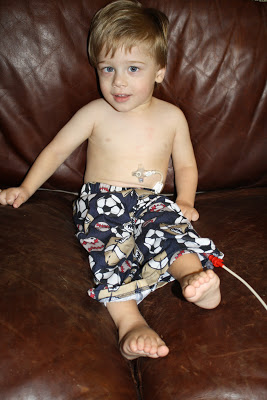 In one year, he’s gone from a failure-to-thrive baby who struggled with every bottle and every bite, to an on-the-growth-chart toddler who we don’t have to worry about getting enough calories. Yes, he still has GI struggles, but his tube is almost nothing but a blessing.