I know you are tired of looking at pictures of my little boy asleep in his crib, but he’s just so sweet when he sleeps and I think it’s so funny how creative he gets with his bumpers every night- I just can’t resist sneaking into his room and snapping away. Also, I am breathing a huge sign of relief that this is where he is tonight. We (finally) made it through a school Friday without a medical crisis or major meltdown. Yay us!

We spent the night at my parents’ house last night (like we do every Thursday to cut down on miles/week I drive to school) and Grayson was so worn out from Brown Bear Brown Bear day at school (see his very first *assisted* school coloring project- humor me, I embrace anything “normal” he gets to do) that he slept 14 1/2 hours! I was so proud that we were actually going to be on time even though he woke up 45 minutes before school started but I powered through and got us in the car in time to get there. But by the time I closed the door on G’s side and opened my driver’s door, he and his carseat were COVERED in vomit. Sigh. Back in the house we went. Even so, we managed to only be 20 minutes late and I left him happy (read: not crying). Success! 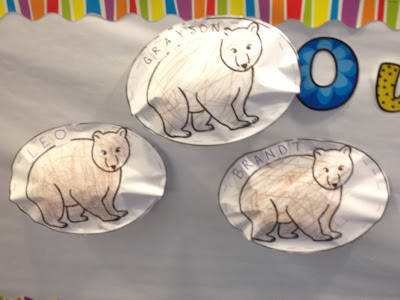 When I picked him up at 3:00, he was sitting on his teacher’s lap intently listening/looking at a book on her ipad. She stood up and when he heard my voice he smiled, popped his thumb in his mouth and lay his head on his teacher’s shoulder. It was the sweetest thing, and made me so happy that he is getting comfortable at school.

*Thursday update: I had my OB appointment and ultrasound. My sister in law went with me, who had never seen a baby ultrasound, so that was a fun experience for both of us. We were walking out and I realized I forgot to ask for a picture- aaa! I do have my anatomy scan week after next, which will give me much better pictures anyway, so I’ll just post those when I get them. Anyway, baby looks great- was wiggling around which was great to see. We are not finding out the sex this time and my OB refused to look for herself- said she would have too hard of a time keeping the secret- ha!

**Wanted to share my “Counting my Blessings/Keeping things in Perspective” moment of the week. Wednesday morning Grayson was having a meltdown and his vision therapist was on her way, so I decided to take him for a walk to calm him down before she got there. It was a beautiful, clear morning and I looked up and saw this, right above our house:

There was another family out for a walk with a toddler about G’s age who was oohing and ahhing over the balloon as he pointed from his stroller. Grayson, of course could not see the balloon and had no idea it was there. Tears filled my eyes as I thought about how much he misses out on, visually. But then, the Whoosh of the burner filled the silence and Grayson startled, looking around for the source of the sound. He hears things. And I am so thankful for his hearing- yes, I get annoyed with his music sometimes, but grateful that he can experience a lot of the world with his ears, if not with his eyes.